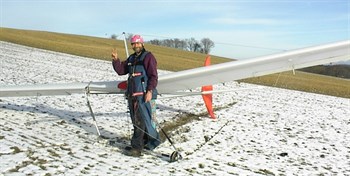 Laurent recently contacted me to tell about his own project, the Spectre. He guided me towards his site. http://zahn.webs.com/spectre.htm

"Hello Koen I started this project before the arrival of the Exxtacy, he had to overcome the delta wing of the time. I took a long time to finish, with the family, the job, the house ... and when he began to fly, the Atos were there, performing, safe, and tested by someone else! so I still built a smaller rear wing (1m2) as the glider was too stable on the longitudinal axis, but not tried since.

1) Q) is there any intent to work further on the Spectre or is the project stopped?

A) I still believe in the concept: a standard glider will always be better as a tailless, particularly at low speed. But since 2008 I have no more time and money to continue, because I have given up the good job I had to create a delta School...

2) Q) were you pleased with the overal handling of the Spectre during the flights? Glide ratio? Stability in roll and in yaw?

A) Handling were very good in roll, but too stable on the longitudinal axis. Glide ratio like the Exxtacy (?) at a little lower speed. I have a better wing (airfoil, aspect ratio, twist), but a kingpost and many cables.

3) Q) i read something about troubles with the spoilers. Can you tell me some more?

A) First I didn't put spoilers, but a special sistem with spoilerons for twisting the wing, Obviously it did not work!

A) Take-off is tricky, but not because of the spoiler. The problem is bad static equilibrium because of the position of the pilot and the weight of the tail. You can not enjoy the weathervane effect until the tail flies. A little crosswind and with the dihedral we do not control the trajectory.

5) Q) did you experience height loss when using the spoilers a lot? Let me explain this question. A guy i know, who in learning to get his CPL (commercial pilot license) explain me the difference between ailerons and spoilers. He said: “ailerons make one wing go up, the other down. The center of the airplane stays at the same height. Spoilers make one wing drop. The center of the airplane drops too. So …watch out when using your spoilers at low heights.” Did you feel this too during your flights?” I thought to see this in one of your first testflights on that training hill.

A) No problem with spoilers, they are only actuated briefly. This system works very well, also with Atos. 6) did any other pilot than you fly the Spectre? If yes …is he willing to give a flight report (in french is also good)? No...

7) Q) the picture of you standing to the Spectre on the snow (you give peace-sign with fingers) gives me the impression that …the landing did damage the triangle. Is that right? What happened?

A) The only downtube I broke in the test. It was the first attempt, before the installation of the spoilers.

8) Q) i was very happy to see somebody have the guts to create something like this. Did you have extra safety items with you during the test flights? I ask you because …i will have to think about that too when doing my own BirdGlider testflights next year. Main difference is …you are a expert pilot. I am a beginner. :-/

A) Yes I fly since 1976. But I took a balistic parachute with compressed air.

9) Q) Last question. I used several pictures of your site. I hope you are not offended of me doing this.

A) No worries, I'm very happy if someone copy me, going further! A proverb says, we must plant a tree once in his life. I say, we can also build a flying machine! Here, it's done. Maybe I will continue this project, or perhaps not. And solving this problem of take-off Do not hesitate if you have other questions. 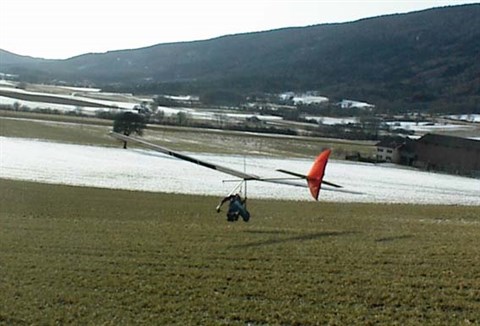 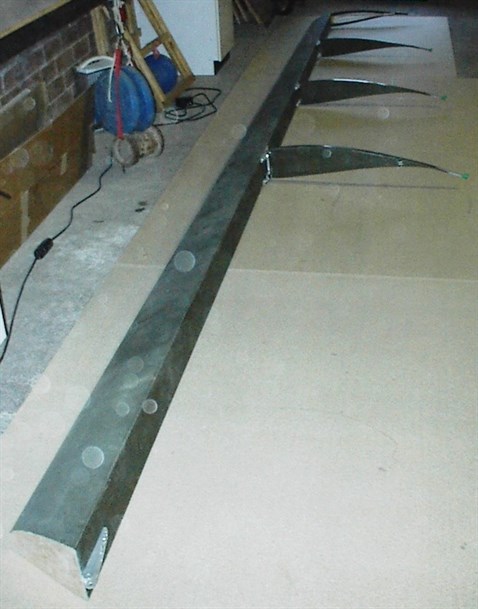 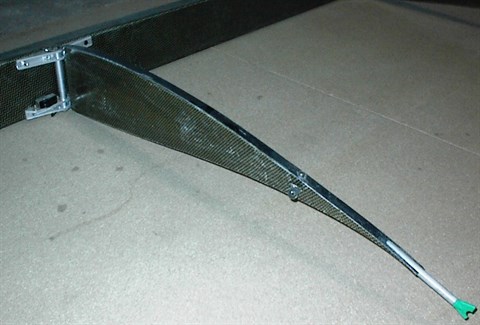 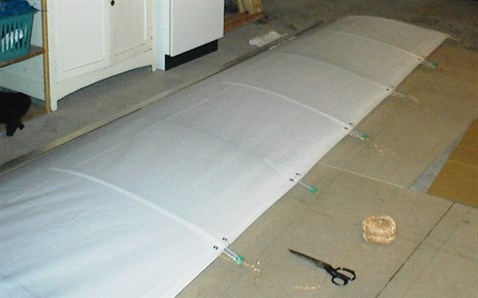 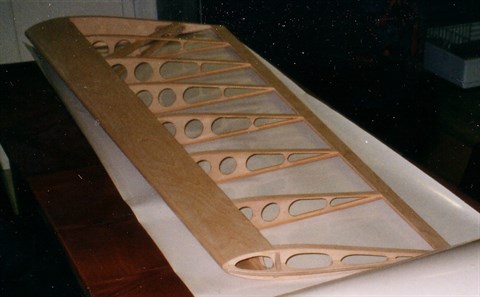 The first horizontal tail was a classic wooden construction. 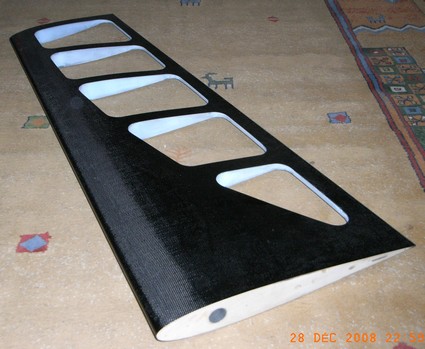 Later a foam-carbon edition of the tail was made. Not sure if this one was ever used in flight.

Thanks to the hinges on the ribs the Spectre was able to be put on top of a car like a normal hangglider.

Give me some time to read more and to ask some questions to the designer.