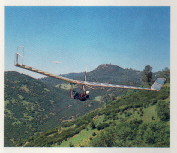 The Odyssey is a foot-launchable rigid wing hang glider designed about 1990 by ... It was not put into wide production.

The Odyssey won the 1991 US National Hang Gliding Championship at Hull Mountain, California, with Eric Beckman at the controls, primarily due to its superior sink rate and ability to glide a long way between small patches of weak lift. The Odyssey used a TK7315 airfoil like the Icarus 5. This gave it a better low end than the flex-wing hang gliders of the day, but less top end.

Here is a picture of the Odyssey flying at a site in California (from 'Drachenflieger' magazine, ~1991). 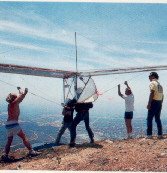