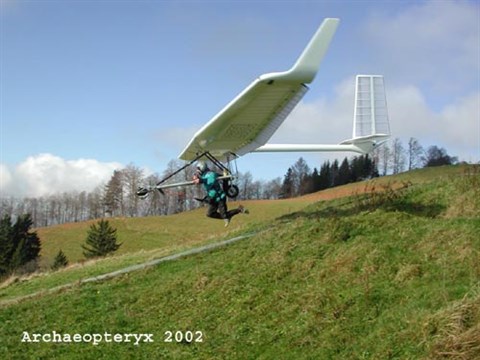 The Archaeopteryx is equipped with flaps, allowing for the performance necessary for a foot-launch. So, it will fit under FAI Class O-2.

Here is a description of the Archaeopteryx from the builder's website:

A conventional aeroplane layout was followed for the Archaeopteryx, to avoid well known problems of flying wings. Primary targets were set to minimize the mass, allowing slowest possible flight speeds and providing good manoeuvrability based on a friendly stall behaviour. Excellent climb rates and an efficient riding out of extremely weak and slim thermals (microlift) are possible. Besides, the concept includes a high performance in fast and uncritical gliding as well.

Besides the main launching method by foot, alternative methods like bungee, car-towing, winch-towing and aerotow using microlight vehicles are possible. The takeoff speed of the Archaeopteryx is far less compared to common rigid wing hang-gliders and includes stability advantages of the longitudinal axis. The around all axis aerodynamically contolled wingflap glider is flown like a conventional sailplane with comparable characteristics of flight, fight behaviour and controls. For all the different flap settings it shows a very friendly stall characteristic, avoiding dropping and risks of spinning during straight and curved flight manoeuvres. The slow landing approach velocity and its effective airbrake allow a small spread landing approach on hang-glider sites. A landing gear with a low touch down speed complete the safe landing procedure.

A conventional control mechanism is implemented in the Archaeopteryx basically used as in all common planes. Ailerons and elevator are controlled by the pilot with a right handed stick, the rudder with pedals. The highly efficient fullspan flap and the airbrake are controlled by a lever located on the left handed side. The very harmonic and not tiring control behaviour is the result of a careful tuning optimization considering the effects and loadings of each rudder. All flight speeds and all the different positions of the flaps refer to a generally good control and manoeuvrability behaviour of the Archaeopteryx and gives a feeling of safe flying to the pilot. 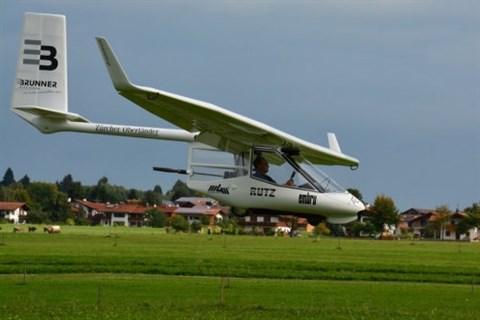 A powered edition is also available.