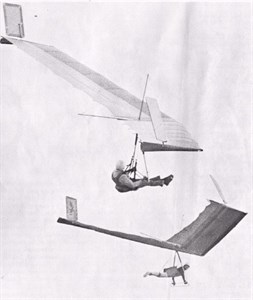 The Fledge used weight shift for pitch control and tip rudders (controlled by twist or slider grips on the basetube) for roll control. As it was quite fast and strong, it was popular for aerobatic pilots, with loops possible at a time when they were impossible in flexwings.

At the 1981 World Hang Gliding Championships in Japan, Rex Miller of the United States was crowned World Champion in FAI Class O-2 (rigid wings). The glider he flew was the dominant model in the class, and made up the vast majority of rigid wings being flown in the world at that time. The glider was the Manta Fledgling. Manta's market success with the Fledgling reached a peak shortly after the 1979 U.S. National Championships in Crestline, CA where Fledglings captured almost all of the top ten placings (I think every "Fledge" in the meet finished in the top ten). The Fledge virtually defined what a rigid wing hang glider was.

As to whether the Fledge was "rigid" or not:

"It isn't heavy enough." The Fledge weighed a massive (for the time) 78 lbs.
"It folds up too neatly." The Fledge folded into a bag smaller than a topless flex wing, but the control bar stuck out.
"The average pilot can launch it easily." Other than being somewhat tail-heavy, the Fledge was launched easily by many average (and even a few below average) pilots.
"It doesn't need a ground crew." See above (skill level and glider weight).
"It's maintenance needs are low." The Fledge was robust and built of standard aluminum and Dacron. 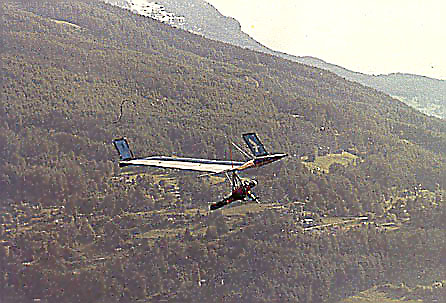 I received the following pictures from Jacques Pierre of his Fledge IIB. Thanks. 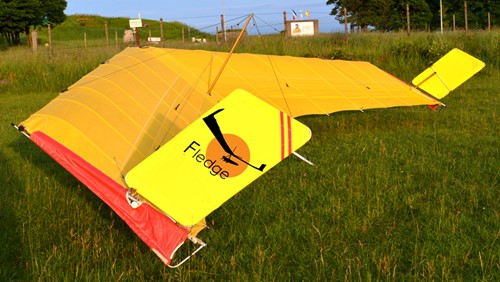 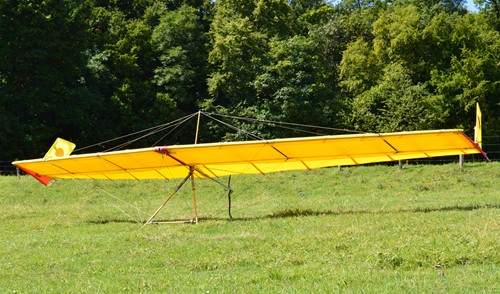 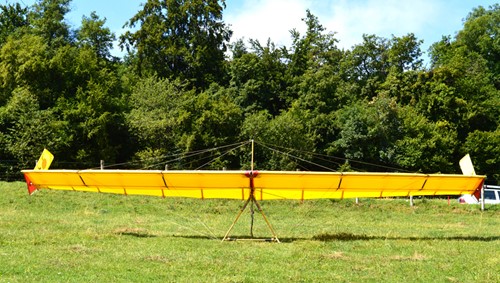 Robert "Rob" S. Murray mentioned me that he was involved in the further development of the Fledge. The new edition was called Voyager.

I had a few emails from Robert "Rob" S. Murray:

"The “ultra-light” version is the powered/motorized version with motor and landing gear. The early motorized hang gliders were called “ultra-lights” by the FAA back in the 1970s and 1980s. At that time, if they were light enough to be foot-launched, they were not required to be registered with the FAA and require a pilot’s license to fly them. I actually demonstrated a foot launch takeoff during an airshow, later I was contracted by Art Scholl to be the “ultra-light” portion of his airshows promoted by Art Scholl Productions. My powered Voyager IIB weighed 119 lbs, so I could pick it up. You’ll notice I had a tail wheel which made the initial foot launching sequence easier, but I only foot launched 4-5 times. All takeoffs after the 4-5 foot launches were normal rolling takeoffs, much safer and easier….duh!

I was ostracized for motorizing my glider at the time….didn’t matter that I would fly motorized only during the winter months when there was little thermal activity, I would climb till I was out of gas and then spend the next 20 minutes gliding down. I would convert back to glider only during the spring summer and fall. The negativity about towing and motorized flight is a big reason I left the sport in the 1980s." 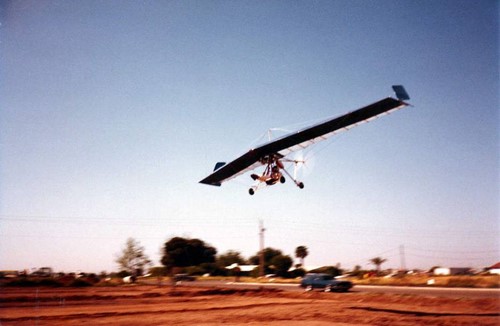 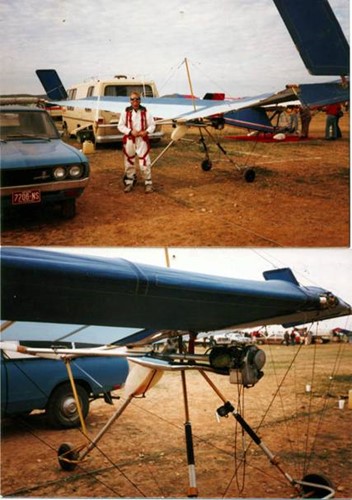 "I flew the motor-glider version of the Fledgling & Voyager IIB in what I called the “su-prone” position.  I used an Easy Riser seat harness which allowed me to keep the control bar rigged for prone glider flying and do weight shift pitch control with my feet with the aid of an additional foot bar extension, roll control was done with twist grips on the down tubes.  Of course the base tube was changed to an integral axle with wheels and a tail wheel strut with gas tank was also added.  This “su-prone” setup with “conventional” tail wheel configuration proved to be an excellent way to motor-glide with the Fledgling & Voyager IIB, it allowed for easy restart of the engine in-flight and was very comfortable and good performing.  I utilized a prop brake which would stop the prop from freewheeling while power-off soaring/gliding, noticeably improving the glide and sink rate.  Yes, I was able to soar ridge lift and thermal with the motor off.  The speed range of the motor-glider Fledgling & Voyager IIB was documented to be 22 mph to 57 mph. "

Rob wrote for some discussion group: "This is my ultralight design which I developed in 1979 when the FAA required ultralights to be "foot launch capable". I demonstrated a foot launch takeoff from level ground, with the FAA observing, at the Watsonville, CA airshow the same year. Art Scholl contracted me to do the ultralight demonstrations for the airshows Art Scholl Aviation promoted. I also won an efficiency "race" from Half Moon Bay to Monterey in California. Based on the documented fuel burn I achieved 57 miles per gallon, needless to say I "augmented" my flight by soaring the dunes along the way." 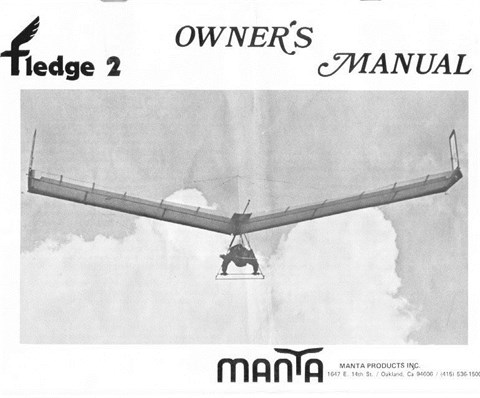 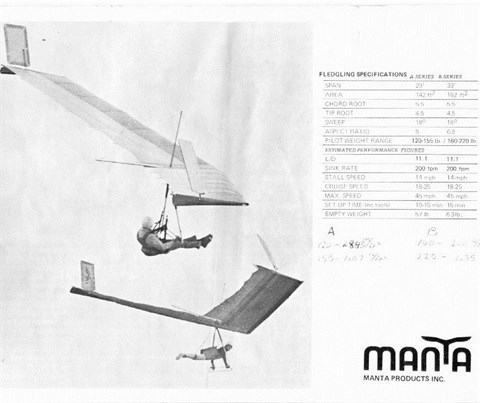 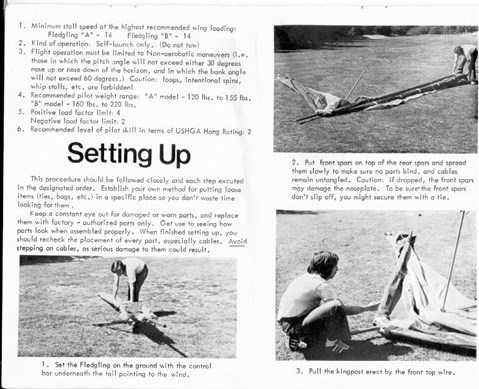 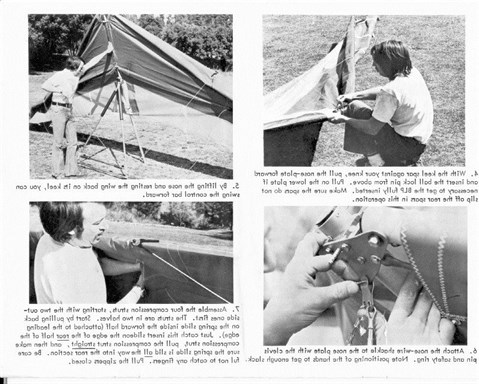 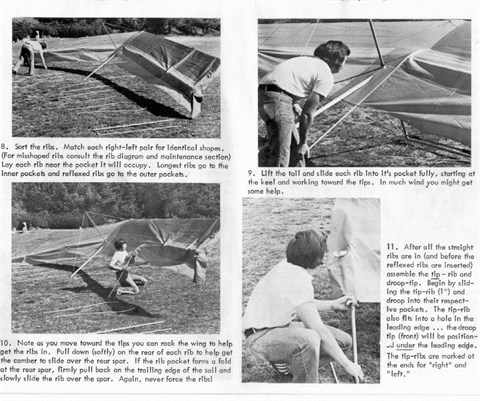 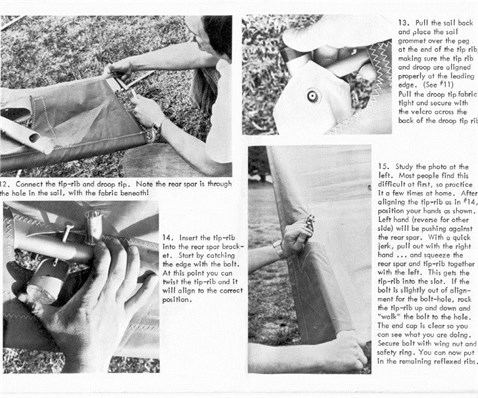 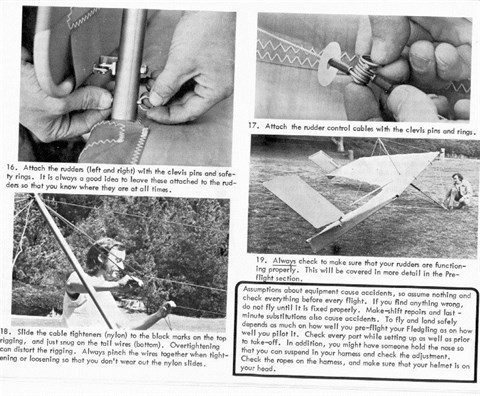