The Klingberg Wing is a unique design of the mid-1980s by Rol Klingberg of the USA.

The Klingberg Wing featured the pilot located in the plane of the wing, thus out of the airstream and causing less drag. Rol said that the purpose of the design was to be the first foot-launched aircraft to have a glide ratio that exceeded 20:1, and to break the world distance record. 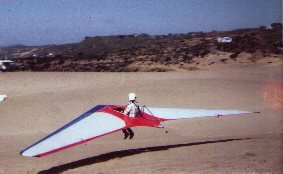 The wing, built of carbon composite, fiberglass, Kevlar, Dacron, spruce, balsa, rigid plastic foam (several types) , with steel bolts and cables, featured a single stick for control using elevons, and spoilers for approach control. It was foldable for car-top transport. The glider took 2 years to design, and another 1.5 years to build. The cost to build it was about $5000 in mid-1980s dollars.

The glider made a number of test flights, logging a total of about 5 hours. The highest launch was made at 7000 ft. (2000m) ASL, and the highest altitude reached was 10 000 ft (3000m). Unfortunately, the prototype Klingberg Wing suffered a crash at Torrey Pines, California and was heavily damaged, though the pilot survived. Development of the glider stopped at that point.